You can get sick (which was why there was no poem last week), or get emotionally involved in news (between Brexit, gun control, and apparent controversies involving our new president, I get exhausted), or even initiate rescue missions (forced to foster kittens we can’t keep to save them from the streets).

But people like us, we have to keep moving forward. Squint at a shimmering horizon. Have faith that it’s not a mirage in the desert of overwhelm.
There are things that happen. They happen to me, they happen to you. Folks who say that we bring all things upon ourselves are bullshitters, because lots of things are beyond our control and trying to avoid them is not living. Things happen.

Either embrace every wonderful, terrible second of it, or quit the world.

Have you ever been through the hell of redoing an outline for what feels like forever? You know, when you KNOW that you need to start writing the damn thing but your outline keeps pulling you back?

Yyyyeeeeaaaah, that’s me and my Project Times Project. I agreed to do it because Marigold, the girl spearheading this thing, is pretty darn awesome. And also, my un-chickening has fallen by the wayside and I need to do something to kick my own butt again.

And in theory, this is great. I’m finding myself jotting down notes and ideas when I have the time in my (admittedly insane 3 am to 2 pm) work schedule. And they’re really INTERESTING ideas because I have looming deadlines keeping things fresh. Some of you writerly folks might be able to relate.

In practice, I’m actually kicking myself way too hard. I’m all ideas and no forward motion. I don’t know how to sew these things into a cohesive narrative quilt. Every time I try to get into the writing phase, I either end up with more notes or a zoned-out phase that lead me incapable of complete sentences. And I give up to crochet/knit or doodle/paint instead. 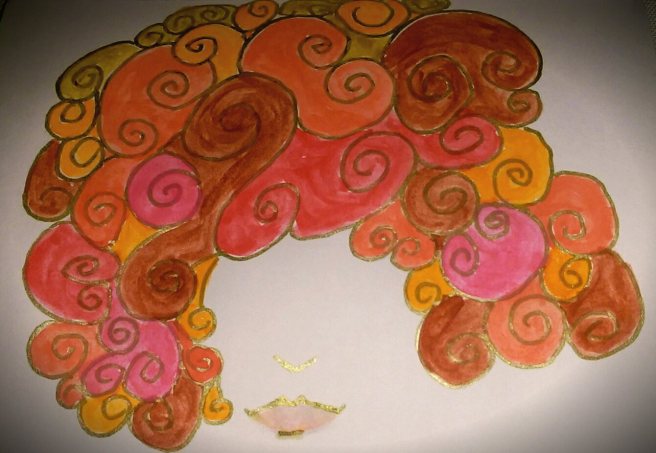 Admittedly, doodles like this kind of inspire me and give me more idea-WHEN WILL THIS STOP?

I’m not the only one, am I? The kind of writer who is all ideas but can’t concentrate enough to follow through? I’m sure the other authors participating in this project are faring better than I am.

Heck, I bet YOU are better at this than I am. If you are, and you’re interested in joining—come on, the minimum length is 1000 words!—then reach out to the Project Times peeps. They’re really nice, and this is a really cool idea.

Gleefully suffer with me. 😀

I had a revelation over the weekend – I’m awesome because I know that I suck in general. Seriously, that’s what makes me awesome.

Many people don’t want to admit to the world that they suck, but I find it so inescapable that I don’t even bother denying it. I’m horrible at a lot of things. I can be a really terrible person. I’m not even the best writer in the world ever and I still sometimes tell people how to write better. It’s why I have this repeating image on my blog:

I’m really not all that good at a bunch of stuff. But – and here’s the important part – I’ve learned to recognize it and do something about it if I don’t particularly like being sucky at something. I don’t always succeed. In fact, I often fail. But in doing something about it, I feel awesome and therefore become awesome.

I know people out there are also awesome because they recognize their own suckiness and use that to better themselves. But I think far too many folk just declare themselves infallible and refuse to believe that they make any sort of mistake in their lives. They just insist that they are THE BEST at something and conclude that they don’t need to improve themselves because of it. They’re already perfect and all that crap, despite the fact that we all know that nobody is really perfect at anything.

I’m not sure if this has anything to do with the fact that people are expected to look like they don’t put much effort into anything or that they don’t really care about stuff (because that’s how you prove you’re cool), but I think that’s really harming a lot of us now. If we refuse to acknowledge our failings, won’t we doom ourselves into making the same mistakes that land us in trouble over and over again? If we don’t take the time to know why we suck, don’t we lose the ability to become better people? Hell, doesn’t the word “better” trump “best” because the former at least gives you something to look forward to, while the latter only promises many attempts by other people to knock you off the top?

Remember: you’re awesome because you suck and you know it well enough to want to do something about it.

Read with Me Elsewhere!